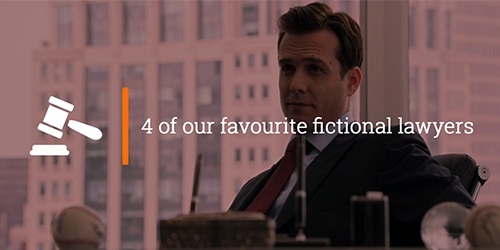 As we all well know, there has never been a shortage of great lawyers in film, TV and literature that we’d want on our side.

The team here at LawBid had plenty of characters to shout about, and although we’d love to list them all, here are the ones we narrowed it down to:

When Alicia was in law school she graduated at the top of her class, after working for two years she decided to leave to focus on her family. Fast-forward to thirteen years later, a scandal lands her husband, a State Attorney in jail. Alicia resumes her career as a junior litigator in order to support her children. Alicia is much more than a good wife, she’s smart, independent and fierce and has everyone cheering her on as she works her away up the career ladder.

We admire her persistence and humility as she juggles her home and work life.

Charming, confident and at times cocky, Harvey is a newly promoted senior partner of a prestigious law firm in New York. He will do anything to win his cases even if it calls for unorthodox methods. And although he may unconventional, he will not alter facts to win his cases. On a side note, he is quite recognised for his fashion appreciation as he once said:

Harvey inspires us all to think outside the box and never doubting in ourselves.

We think Elle would agree with Harvey’s above statement. Elle is an energetic student of fashion merchandising. Initially applying to Harvard Law School to win back her boyfriend Warner, Elle is accepted after her efforts and GPS score in both law and fashion are noticed. After joining Harvard, Warner doubts that she will succeed and tells her she is not good enough, but believing in herself, Ellie is determined to succeed. She receives the internship from the school’s most respected professor, wins her first case and graduates from Harvard, shutting down the “dumb blonde” stereotype.

Elle’s attitude should only encourage us to be as positive as her and care about what we do.

Atticus Finch To Kill a Mockingbird

A father and a lawyer set in a fictional town in Alabama in 1933, Atticus takes on a case that he already knows he’s going to lose but doesn’t stop him giving the strongest defence he possibly can. Atticus is just and honest, representing morality and reason, he is the least infected by prejudice. He disciplines his children when necessary and continually teaches them the importance of treating everyone with respect.

We can all aim to be as fair-minded whether it’s in or outside work.

As we mentioned earlier, there are many more that can be mentioned - Olivia Pope, Abraham Van Helsing, Ally Mcbeal – but these are just a few to sum it all up. So who’s your favourite fictional lawyer?