Most people are aware that using a mobile phone whilst driving is illegal. However you may not be aware that as of the 1st March 2017, using your phone while driving will now incur higher penalties. Prior to March 2017 the penalty for using a mobile device whilst driving, either a car or motorcycle, was three points on your licence. This penalty has now doubled to six points along with a £200 fine.

Using your mobile phone whilst driving has been illegal since 2003 however this does not include hands-free equipment. What it does include is any device such as a mobile phone that would take your attention away from the road. In 2014 there were 492 accidents, in which 43 were fatal, attributable directly due to drivers using their mobile devices.

Many people do not realise they are breaking the law. Below are a list of instances that will result in a fine and points being issued:

Police may still stop and issue points and fines if you are distracted when in control of a vehicle, this could be due to using a Satnav or a car radio.

There are only two circumstances in which you are legally permitted to use your mobile phone. Firstly in an emergency when the vehicle cannot be stopped safely and secondly when you are parked.

What are the new penalties?

If stopped by the police for the offence of using your mobile device, then you will be subject to six points on your licence and a £200 fine. However, if you have passed your test in the last two years prior to the offence your licence will be revoked. This means that you will need to retake the theory test and practical test.

Drivers that passed the practical test longer than two years ago will be issued with the six points on their licence. This means that if they are caught for the same offence again in the next three years, they will be disqualified from driving. If the matter goes to court, the driver is then at risk of disqualification and subject to fines of up to £1000. For bus drivers or goods vehicle drivers this fine could increase up to £2500.

The maximum amount of points that can be held on a licence is 12 and this could result in being banned from driving. The length of time that the points must remain on a licence depends on the offence. For the offence of using a mobile phone whilst driving, the points will be held on the licence for three years but will be visible for four years.

This means that although the points are no longer held on the licence an employer or an insurance company will be able to see the points for four years from the date of conviction. The codes that will appear on your licence will either be DD40, DD60 or DD80. 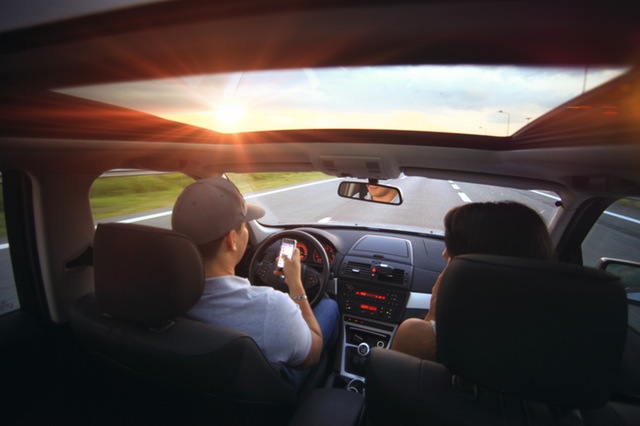 THINK! have released a campaign to make drivers aware of the changes and the legality of using mobile devices. The campaign has the slogan ‘Make the glove compartment the phone compartment’. What the campaign aims to do is to remove the mobile phone completely from being used whilst in the vehicle.

The THINK! advice suggests that people should put their phone somewhere that will not tempt them to use it and to try to use hands free equipment where possible. They also advise that people refrain from contacting anyone else who they know are in control of a motor vehicle.

The THINK! campaign, whose advice prompted the changes in the law, stressed the following:

On the first day of the new laws, the police put more patrols on the roads. This will continue for a seven-day period in order to catch more offenders. In Oxfordshire the police caught 11 offenders in the first two hours of patrolling. In Dorset, police patrols caught 31 offenders by midday.

The key message for all drivers is simply not to pick up your phone at all whilst driving a motor vehicle. As advised by the THINK! Campaign, why not place your mobile device in the glove compartment before you start your journey.

LawBid connects individuals with solicitors who specialise in Motoring Offences. If you have been caught out using a mobile phone at the wheel, or if you feel you have been wrongly accused, register and post your case on LawBid today.